This is without a doubt the most delightful video for children. Not only is it entertaining, it is informative. The directions are very easy to follow. Children will enjoy watching this just for the sheer joy. I especially like that children of varying ages are also the teachers.  This video should inspire you to help your children learn succulent gardening.

Teach Children How to Garden

In this segment, we’ll be showing you how to plant your summer vegetable garden. The two most important things to keep in mind when planning your vegetable garden are plant spacing and full sun exposure. Today we will be planting some of our favorite summer vegetables: tomatoes, cucumbers and lettuces. Let’s get going!Right now we’re gonna plant lettuce.

Step one: dig a hole.

Step three: take the lettuce out of the pot.

Step five: put the plant in the hole.

Step six: put the soil around the plant.

Planting tomatoes is the same as planting lettuce, but one big difference.

Step one: dig a hole.

Step three: pinch those bottom branches off and put them in the ground and it will make roots.

Cucumbers are very delicate plants. When planting them, you want to make sure not to touch the roots at all.

When planting a cucumber, the first thing you want to do is make a mound. You want to make sure the mound is evenly mixed between soil and alfalfa.

After you make the mound, you want to dig a hole in the middle of the mound to place the cucumber.

After making the mound and the hole, you want to make sure you evenly water it.

Take the cucumber plant out of any containers and make sure you do not touch the roots. Place it into the mound and cover the base with the soil surrounding it.

After you’ve covered the base of the cucumber plant, make sure you water it evenly.

Alright everybody, are you guys ready to plant some seeds?

Alright, so first we’re going to plant some bean seeds. So everyone hold out your hand. Now make a pointer finger. You want to make a hole as deep as that knuckle. Everyone take a bean seed, put it in, cover it up and let’s give it some water. When you plant big seeds like beans, it’s important to have at least six inches in between them.

Next, we’re going to do carrot seeds, so you see these little tiny seeds? Those are carrot seeds. They are so little that the way we’re going to plant these is you make a line in the soil where you want your carrot, and then everyone take a pinch of carrot seeds, and sprinkle them down the line. Then you really carefully put the soil over the seeds and we water again.

You can do it! You can teach children how to garden.  You will need to adapt some of these suggestions to the age and abilities of your children.  Starting with succulents is a great way to get children involved.

This short tutorial will give you the reasons why your succulents become elongated and look unhealthy.  Trisha describes how to fix elongated succulents and how to prevent it in the first place.  Then she has some tips on how to quickly propagate succulents. &nbsp &nbsp [Transcript]  Hi guys my name is Trisha with Chapstick and Succulents…

This is an interesting video quickly identifying various succulents. There are many succulent varieties shown and described.   Also, if you have ever wondered whether those brightly colored small succulents are natural this is an interesting discussion about them. &nbsp &nbsp Hello humans! Welcome back to my channel. Identify Various Succulents For today I’m taking you with me…

There are some great DIY succulent soil tips in this video. What I especially like about this video is her reference to the use of coconut coir.  She explains the advantages of coir over peat moss.  The advantages of calcined clay are also discussed.  She tells where to find products as well.  This is a… 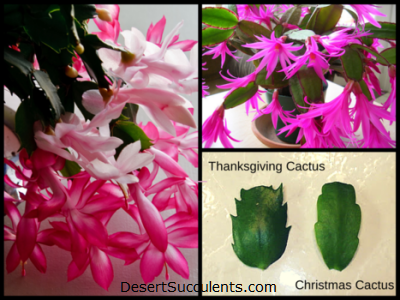 Although they look very similar there are some distinct differences between the Christmas Cactus vs Thanksgiving Cactus vs Easter Cactus.  Each of these succulents derived their common names from the time of the year that they typically flower in North America.  Collectively and even individually they are sometimes referred to as ‘Holiday Cactus’. &nbsp &nbsp…

Laura produces some of my favorite informational videos. This video has some great tips on how to propagate succulents. She also has invaluable information about whether you will be arrested for propagating your favorite succulent. Enjoy! &nbsp &nbsp Hey guys.  Laura with Garden Answer.   Today I want to show you a really easy way to…