This video is an interesting interview of Milo Shammas, the founder of the Dr. Earth potting soil company.  He discusses the importance of high quality organic potting soil mix for all plants including cactus and other succulents.  Read our review about the highly recommended Dr. Earth Cactus & Succulent Potting Mix for both indoor and outdoor succulents.  Using the best succulent soil you can find is critical for growing healthy thriving succulent plants.

Milo, you were raised in Los Angeles and now that’s hardly the hotbed of organics and so how did you invent the Dr. Earth line of organic some 25 years ago? You know correction, I’ve always had this dream and I’ve always wanted to be a country boy you know. I used to fantasize by being Huckleberry Finn. Until I gathered up friends and have them play Tom Sawyer and the only real place I can fantasize about being Huck Finn was in the garden.

That was the only real natural environment that I had in Los Angeles and my mother Jeanette who was just a great gardener she figured this out at a really young age. You thought if I got Milo to pretend like he was Huckleberry Finn in the garden I can get him to do some weeding with me. I can get him to kind of work in the garden. That’s how Dr. Earth was actually born in Los Angeles. I mean I know you don’t typically think of organics when you think of Los Angeles. But to me as a child it was the most natural place that I could find in Los Angeles was the garden.

My dad Lou used to take me fishing when I was a little kid from the time I was about five years old. We go fishing off the coast of Southern California. The fishermen would take the fish fillets home with them then they would take all these fish parts, the bones, the intestines, the heads, the skin and they treated them like waste and they would throw them away. So I thought I can recycle these parts because I learned this great lesson when I was in the third or fourth grade about the Pilgrims and the Indians and how the Indians taught the pilgrims to take these fish parts and bury them in the soil and grow the corn.

So it was on the fishing boat with my dad that I thought God all this stuff is being wasteful throwing all this great stuff away. So I brought it home with me and with my mother’s guidance we buried it in the garden just like I learned in elementary school and we began to grow organic vegetables using fish products. And the results were amazing.

That was the birth of Dr. Earth without even me ever knowing I had invented a product line when I was seven years old simply by going fishing with my father and taking this stuff home and just using it at the garden with my mother’s guidance.

It was you know it’s just it brings such joy to me that memory. Saw those beautiful fond memories of playing in the garden weeding and cultivating and burying all these fish products and you know the reality is though fish is loaded with micro nutrients and it really, really works.

TruBiotic is such an important thing. As you know the human body needs probiotics.

First of all let’s look at the word probiotic, it actually comes from two different words – pro means for – and biotics comes from the greek word bio which means life. So it’s literally “for life” and your body needs these beneficial organisms to remain healthy to remain to fight off diseases to fight off viruses. The soil is very much like the human body in that it’s a living organism. If you look at the soil as a whole to living organism and you need probiotics in the soil just like the human body needs probiotics inside of them.

TruBiotic makes organic materials work in the soil. That’s the essence of it. That’s the reason why it’s so important, it fights diseases, it makes organic nutrients available, bioavailable. As plants can use these nutrients they become healthy. It’s very much like you and I we go up we eat a meal unless our body has these digestive enzymes to break down the materials and you know within our body we don’t get the nutrients from them. And that’s what TruBiotic does but it does it in the slot. It breaks the materials down in the soil. It converts them into a form that becomes bioavailable and then the plant roots absorb them making healthy plants. That’s the essence of it. That’s why TruBiotic is so important. Makes healthy plants which in my opinion the healthier the plant the healthier the people.

The important part would be the benefits of using organics would actually work. Otherwise if they take organic materials home and they’re not TruBiotic they just take forever to break down and the plants can’t benefit from them and you’re not benefiting. You’re not building a life in the soil.

That’s the benefit to the home gardener is that now all these organic components work. So that’s why TruBiotic is probably one of the most important inventions in the last 50 years. I’ve been told this many times that until TruBiotic was invented in 1991 organic fertilizers and organic soils were very slow and they simply did not work and that’s the reason why my company is very successful because I invented TruBiotic. I made organics work.

Our Summary:  There is no question about it that a good organic succulent soil in the right balance will help you grow beautiful and healthy succulents.  The Dr. Earth Succulent Soil has all the ingredients we put in our own homemade batches of cactus and other succulent soil potting mixes.

There are many low light houseplants that thrive indoors. It is still important to test light conditions with a test light probe to provide the optimal growing environment. A good light sensor will give you accurate light readings so you know for sure if there is too little or too much light intensity. Houseplants are… 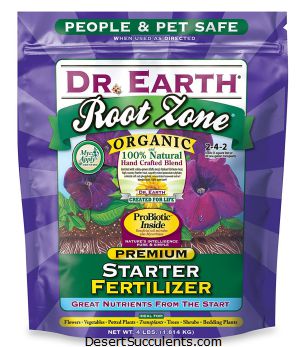 We recommend Dr. Earth Root Zone Fertilizer blend as an incredible supplement for succulents of every kind. It is a common misconception that succulents never need to be fertilized.  It is true that most cactus and other succulents will grow just fine without supplemental fertilizing.  There are, however, many factors that will make fertilizing succulents a…

The University of Illinois Extension is one of a long list of universities that encourages using houseplants to clean the air. Research shows how toxic pollutants can build up in our homes and offices and how plants can efficiently cleanse the air. This short video, Greg Stack highlights these facts and calls houseplants clean air…

For quite awhile we have recommended Dr. Earth organics for both succulent soil and fertilizer.  These quality products are used by experienced gardeners everywhere because they work!  If you don’t want the time, expense and trouble of making your own succulent soil compost we recommend using the Dr. Earth potting soil. This video is an…

For best results use a light sensor for measuring houseplant light levels. It is easy to guess incorrectly when it comes to the amount and intensity of light that a houseplant is receiving. Many plants will do just fine with a wide variety of light levels. Other plants are more particular and require not too…