There are some great DIY succulent soil tips in this video. What I especially like about this video is her reference to the use of coconut coir.  She explains the advantages of coir over peat moss.  The advantages of calcined clay are also discussed.  She tells where to find products as well.  This is a very informative video about succulent soil.

DIY Succulent Soil – How to Make Your Own Mix

Hi guys!   This is the first video in a series of cactus and succulent videos that I have planned for you.  So I wanted to start with the foundation and kind of get that out of the way because that’s sort of the biggest part of having thriving succulent or cactus or not.  Your soil can literally make or break your cactus.  It will either help it thrive or it will kill it and that’s why it’s so great to have control over your soil so you can customize it to you and your plants.So what I like to do is mix up a regular cactus potting soil so I’ll buy this one at Lowes.  It is just the Kellogg brand and it’s for palm, citrus, cactus and succulents.  Where my favorite potting ingredients to use no matter what kind of plant I’m putting up is cocoa far.  And I’ll use far instead of peat moss so in place of peat moss.  Peat moss I try to stay away from because I don’t like the way that it pulls, it like shrinks and pulls away from the sides of your pot, and it doesn’t really wet there easily.  So you go to water like especially with cactus and succulents where you want the soil to dry out you go back to rewater and it will just kind of bead off the top of the of the peat moss and down the sides of your pot because it’s pulled away from the sides of your pot.Here’s an example of a peat moss potting soil mix.  You can see how it shrunk away from the sides.  It’s extremely compacted and very crispy.  It’s going to be very difficult to try to rewet this soil again and actually get the water to the plants roots.  On the other hand coconut coir, even though both soils were completely dried out, the core has remained very lightweight.  It kept the soil aerated.  It doesn’t shrink.  It hasn’t compacted and it’s going to be very easy to rewet this soil again and it’s excellent at retaining water.   So the coir bricks come in something that looks like this. This is a smaller piece so the bricks that I get are, they’re like, in four sections and are really easy to work with.

Some manufacturers will have larger bricks and it’s going to make a whole bunch of parts.   So if you’re doing a big project then that’s great, but if you just do like little bits at a time like you’re only putting up a handful of plants at a time then I can like to go for the smaller bricks.  That way you don’t have to have so much because this gets really big.  In fact one of these bricks makes a huge bag like this so it really soaks up the water.  So this side is like my solid soil ingredients and then porous ingredients on this side.  There’s lots of different porous ingredients that you can choose from.

Humus is my first choice.   I can’t find it though in my area but if you look at feed stores you can find it under the name ‘dry stall’ – not ‘stall dry’.  There is a store in my area that has ‘stall dries’ a totally different product but you want to look for ‘dry stall’.  I can’t find it though so I have to use perlite.  They do kind of the same thing they will aerate your soil they’ll make it light and fluffy and I also use the black lava rock or cinder scoria.  There’s different names for it and there’s also red lava rock but the black one is the one that I go for because it’s small.  So there’s a lot of small bits in it; it’s pretty broken down.

All right, so let’s go ahead and prepare some coconut coirs.  So I’ll just pull out of the brick and I’ll break it in half.  This brand has it perforated down the center so it’s really easy.  The bricks are very thin that they have so it’s just easier to work with and I’ll just take off half that brick and put it back in the bag.  The bags are made to be able to pour the water directly into and prepare it right there in the bag and I’m using warm water.  My watering can has been sitting out in the Sun all morning.  So I notice that warm water tends to help soak into the core brick a lot faster than using cold water.  But use whatever you have available.

So I’m just kind of soaking that in and then I go in and I kind of work off any of the pieces of brick, sort of just separating the pieces just making sure that there’s no, you know, hard dry pieces of the brick left just making sure it’s all completely soaked through with the water.   I’ll let the coconut coir mixture sit for about 15 minutes before I start working with it.

Right now I’m just adding some of my cactus and succulent potting soil to my mixing container.  Just throw a few handfuls of that in and then a few handfuls of the coconut coir.  So this part of the mix is really what’s going to retain the water and the nutrients for your potting soil and the coarse gritty products are for adding aeration to your soil and to make it fast draining.   And succulents and cactus need a super-fast draining soil.  They do not like to have wet feet.

Now I’m adding a few handfuls of the black cinder and like I said there are other products you can use you could experiment with; Turface which is calcined clay or like little clay pebbles.  There is crushed granite that you can use, pumice any of those products would be excellent and you can definitely experiment and find what works best for you and what’s available in your area.

So I’m just mixing that up.  I like my mix to be as gritty and as fast draining as absolutely possible because I’m always afraid of over watering my succulents. What I’ll do is I’ll squeeze a handful of it and if it breaks apart and crumbles I know I’m good and that’s the soil I want.  If it holds its form then I need to add more of the grit to it and I try to keep the grittiness as uniform in size as possible. So if there’s any large chunks of cinder I’ll just grab those and throw those out.  I don’t want any you know too large of air pockets created in the mix.  I want it to be pretty uniform and help keep the water drainage even as well.

So when it comes to deciding how gritty to make your mix well that depends on what type of plant you’re potting up.   If the succulent leaves are quite fat then they store a lot of water and they don’t need a lot of water stored in their soil.  But if the leaves are quite thin and they don’t store as much water then it’s okay if the soil retains a little more water and isn’t as gritty as if you were putting up a fat cactus.

All right guys, thank you so much for watching.  I hope you found this video helpful and I look forward to doing many more cactus and succulent videos in the future.  So if you have a cactus and succulent soil recipe that you would like to share please do in the comments.  I would love to read through and see how you guys like to grow them as well.  So thank you for watching and I’ll see you in the next video.  Bye guys.

This video had some great tips for a DIY succulent soil preparation.  Some species of succulents have different soil needs of course.  It takes a little experimenting to find out what your plant likes best to thrive.  The point is don’t be afraid to try making a succulent soil blend yourself.

Without enough light succulents will start to stretch out for more sun.  There are some easy steps for pruning succulents that look leggy or elongated (etiolated). [Transcript] All righty guys pardon the jiggly camera for just a second.  I am in the garage so I’m in a little bit of a different setup.  I am moving some… 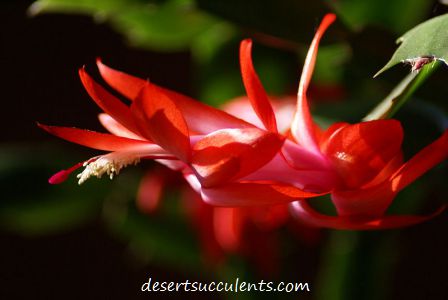 You may have noticed that many succulents, such Ice Plant, Poinsettia and Kalanchoe, are readily available in a variety of attractive colors. However, there are additional plant varieties that produce vibrant red, yellow and pink succulent flowers. We have listed below a few types you may add to your garden by specific flower color. If…

This is an interesting video quickly identifying various succulents. There are many succulent varieties shown and described.   Also, if you have ever wondered whether those brightly colored small succulents are natural this is an interesting discussion about them. Hello humans! Welcome back to my channel. Identify Various Succulents For today I’m taking you with me to Home…

Our Introduction:  This video gives some helpful tips to care for your succulent houseplants. Hi-yah, you’ve got me at my kitchen table today instead of in my bedroom where you normally see me.  And that’s sort of because it just seemed like a more sensible place to talk about what I want to talk about today which is plants and house…

This video has some great tips to teach children succulent gardening. It is an interesting interview packed with helpful suggestions.  You will also have fun teaching children to grow succulents. How To Teach Children Succulent Gardening What a spectacular garden.  I love cacti and succulents and that is just over the top beautiful.  And Richard Blocker is going…

This video and the transcript provide an excellent step-by-step procedure to propagate succulents from a leaf. The steps are shown from start to finish with a lush end product. Don’t be intimidated that propagating succulent leaves will be hard. You will not be successful with every leaf but that is why you try to start…