One way I have actually eliminated fruit flies or fungus gnats in the house is by having what’s called diatomaceous earth. And I wanted to do a video on this months ago but I’m just now getting to it.

So diatomaceous earth I use food grade just in case I want to use it for any other purposes but this bag has been designated for just some plants. And the easiest way that I apply the diatomaceous earth is um I put it into a cheese shaker. I got this from the dollar store and all you do is I’m gonna go to the plant that doesn’t have it on it right now is just come in and just sprinkle it in. Just sprinkling like so as much as you need. I don’t have a gnat problem right now so I don’t have to go crazy on this plant. But you see this plant here to the left of it this is from when I did have some gnats coming in from more fruit that we brought in. And you see it’s caked in here because what I did was before I applied it and make sure the top of the soil is dry. Not not the entire plant pot because the plant still needs water but you make sure the top is drier. That way the diatomaceous earth can stick to it but without getting too wet so that it doesn’t do its job of actually killing the gnats.

So what it does is actually like shreds them that destroys them so if they’re in the soil or if they want to land on it it will destroy them. So it’s not like really just a poison that they’ll eat it actually goes out to their exoskeleton if that’s correct. But it’s really good and as you see this has been caked up in here for a while. I still water on top of this and it’s still fine as you see this is one of my propagated Persian Shields from the spring and this is a second one. So let me have two left
but they’re doing fine. Diatomaceous earth does not kill your plants so this is just a really quick video on caring for indoor plants when you really don’t like bugs in the house and also if you’re someone who brings plants from outdoors as well in the winter time. Well before the winter hits so you can actually save your plants, I’m not sure what the lighting is like on this video, so you can actually save your plants then diatomaceous earth it’s something that you want to have.

Because what I do is for the bottom of the plant pot when I bring it in I’ll put up like a plastic excuse me like a plastic bag on the bottom and then I’ll just place the diatomaceous earth on the top soil. As you see I put it in this plant too it’s only stuff where these leaves are because what I do is they’re fun if I have leaves that are starting to fall off or they fall off I just place them back into the soil. So that actually gives sometimes the gnats another way to hide. So they can hide under the leaf or they can hide and in the rocks and so on but as you see diatomaceous earth is really good to use as it does not harm the plants.

And if you’ve been following my videos this is actually the the main the mother plant that I was propagating off of and look at it it’s happy. She’s still happy and she’s actually grown a whole lot larger see that. And the purple color actually did come back but it doesn’t come it doesn’t always go towards the the lower branches. This one is a new growth off of there.

So it’s actually really good to propagate propagate these plants even though this one um has a whole nother branch coming out of it but yeah you did well. I love this plant. I love all my plants and this point here is a it’s a cutting from my deceased grandmother’s plant that I actually have another plant off of that cutting and I need I need to somewhere to put it so I didn’t really have space so
I decided to put it in here because the roots on the Persian Shield is actually very shallow compared to these roots.

I don’t remember the name of this plant right now but the roots on this plant they’re like alien monster looking they’re crazy-looking but so they’ll probably do well together in this pot. So I’m gonna see how that goes together but I’m not gonna have them competing for anything. If it doesn’t work out I’ll take it out as soon as I see that but yeah there’s a quick video.

So basically that’s an update on my Persian Shields and there’s a way to maintain your plants in the home without bugs. So for all those who really want to have plants in the house but can’t do the bugs there’s your solution.

And actually I’m gonna add another one if the gnats are not really responding at
that time to the diatomaceous earth maybe you’ve been doing it too much of it or if you haven’t been waiting for the soil to dry out then you can also add a bowl of apple cider vinegar with a little bit of water around your plants. You can put a bit of dish soap in it like Dawn dish detergent maybe a drop or two in it and then you’ll see that you’ll have gnats also going into that as well.

But yeah so those are two ways actually but the diatomaceous earth this works works really well alright have a good day.

There are no great secrets to potting succulents successfully.  There are some things you can do to make succulent potting easier and to end up with healthier plants.  This video has some tips and shows some easy ways to pot succulents. Hey guys.  It’s Mai today.  I’m going to be showing you guys how to pot…

Even beginners should have no trouble making cactus and succulent soil for their houseplants.  Cacti and other succulents do prefer a soil that is different from most of your other types of houseplants.  There are a few key ingredients that should be in every succulent potting soil. Hi, I’m Marci Degman the aspiring gardener, and today…

Testing soil moisture is not an exact science but a soil moisture sensor kit makes it much more accurate. This video does not specifically mention a soil moisture gauge but gives an interesting and easy to understand explanation of how plants draw water up through their leaves.  After watching this video check out a soil… 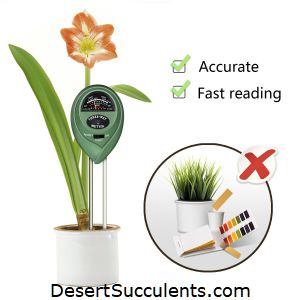 Growing succulents is fun and easy!  There are, however, some recommended products that make growing succulents even more successful.  The items we have on this master list will help you grow and care for your favorite succulents!  Grow the most beautiful and healthiest cactus and other succulents!   Dr. Earth Exotic Blend Cactus & Succulent Potting Mix…