Tips for Caring for a ‘Janet Craig” Succulent

The ‘Janet Craig’ is a great succulent for the home or office. It provides lots of colorful foliage that also makes other plants look great.  This video and the transcribed text below provides some great suggestions to keep caring for a ‘Janet Craig’ and other Dracaenas healthy and beautiful.

Hi; I’m Catherine.  Today we’re talking about the Dracaena family commonly called Corn Plants and some people call them palms but they’re clearly not palms.  They are a variety of plant that are all cousins and they’re Dracaenas.

This is one of the newest varieties.  This is a Dracaena deremensis, ‘Janet Craig’ variety ‘Lemon Surprise’.   I know you wanted to know all that.  Let’s just call it ‘Lemon Surprise’.  It’s got lemon colored new growth and the new growth twists.  This is actually a six inch nursery pot and there’s three stems three cuttings. This is its slightly larger cousin ‘Lemon Lime’.

This is another Dracaena ‘Janet Craig’ variety called lemon lime.  It’s three but they’re much bigger.  This is a miniature variety.  The common one you’ve seen for years is your standard ‘Janet Craig’ and the beauty of this plant is its beautiful dark green leaves and natural shine.

Now what happens with all your Dracaenas is they tend to get a little brown on the tips.  So all you need to do is just take a nice sharp scissors and trim it at a nice simple angle just at the edge.   Why do they turn brown?  Well in nature it’s much higher humidity than that would be indoors.  That is just one reason.

The other thing they discuss is that the water has salt and fluorine init and ’Janet Craigs’ and all of your Dracaenas are sensitive to fluoride.  So they put the fluoride  in the water to help our teeth stay healthy but it does make little brown tips on your ‘Janet Craigs’ and your old Dracaenas.

So just take a nice sharp scissors and trim it off like I’m doing.  If it turns a little more brown just go back and turn that again.  Now this one is called the tip cutting.  They take a large stem from the top of a ’Janet Craig’ stick it in a pot.  Stick all three the same pot and this is a ‘Janet Craig’ bush.  You can also get ‘Janet Craig ‘in a much much larger size.  This is a ’Janet Craig’ cane.  So you can do see it’s a two-foot plant a 4-foot plant and a three and a half foot plant and then they grow tips out.  This can be a tall plant that you can put in someone’s office.  You can also get them larger than this.

Now the most common of the Dracaenas is one that everyone calls the Corn Plant.  This is Dracaena massangeana.  When you first get them in from Florida they have this nice golden yellow center to the stem.  If they’re grown in really low light and they’re not fertilized, over time this yellow the new growth just comes out plain green.  But these can grow very tall and they’re very easy.

So let’s talk about care of Dracaenas.  They come from the tropics so they like to be warm.   50 degrees to 80 degrees is ideal.  The watering, you want to let them dry out an inch or so down into the soil and then soak them thoroughly. Don’t let them sit in water.  They’re pretty easy and the thing that’s surprising, especially with the ‘Janet Craigs’, is it may take weeks before they need water. So just because it’s Sunday doesn’t mean you want to water it again.  So check it once a week.  Check them thoroughly.  Go by weight.  Go by moisture.  Don’t water until they need it.

I’ve seen ‘Janet Craigs’ in indoor environments, in fluorescent light, where they grow very well.  They may take three, four, five or even six weeks before they need water.  When they do need water you want to soak them and the reason you let them dry out is so that you can allow air to enter into the soil.  So the roots aren’t over saturated and the roots all need air to be healthy.

So hold on just a minute while I get a couple other Dracaenas to show you.  We’re showing you the whole family.  Okay I’m back.  We have two more really neat Dracaenas.  This one is a dwarf ’Janet Craig’ called ‘Compacta’ and this is grown in a keen form like I showed you.  The other one has much shorter leaves and much narrower leaves.  This one has five canes in it and these are generally grown in Hawaii with these beautiful tropical looking heads.  If you need a really narrow spot the ‘JanetCraig Compacta’ is a great plant for that.

Now I took the time to put leaf cleaner on this.  I’ve shined it all up but you see it still has those little brown tips.  So one time when you’re sitting watching television just take your little scissors sit in front of the television and clip all the little tips off and you won’t have brown tips anymore.

This one is a plant that you’ve seen many times.  This is called the ‘Dragon Palm’.   It is not a palm. It’s a Dracaena but what a great way to grow it.  This one just came in from Florida and it’s called a braided Dracaena marginata and what they’ve done is they put tubes in it so that the stems don’t grow together.  Then they’ve staked it so it would ship.  So in order to put it in your house you’d take the bamboo off and you take the circles

out.   But it ships better this way, so, yes let’s see, 2 4 6 8 stems carefully braided all up and all the heads at the top so it looks like a tree. You’ve seen it when they grow it straight, and it has heads all different, but what a neat way to grow it.  A braided Dracaena marginata.   This one likes a little more light than the other ones.  All Dracaenas can grow in fairly low light as long as they’re not over watered.  This one you want to put in a little better light in a window and they’ll all be happy long-term.  So enjoy the family of Dracaenas that will grow great in your house.

The video you just enjoyed offered some good tips for keeping a ‘Janet Craig’ healthy and thriving.  You can refer back to the transcribed text if you forget something.  Enjoy growing and taking care of your Dracaenas whatever variety you have.

This is an interesting video quickly identifying various succulents. There are many succulent varieties shown and described.   Also, if you have ever wondered whether those brightly colored small succulents are natural this is an interesting discussion about them. Hello humans! Welcome back to my channel. Identify Various Succulents For today I’m taking you with me to Home…

Succulents that purify air are easy to grow and look great in your home or office.  In this video, according to Mandy, succulents can clean radiation from the air that comes from our Wi-Fi, cell phones and other electronic devices. Be sure to also read about the six plants that are the best air purifying…

This is one of the best videos I have seen. It is packed with everything you need to know as a beginner. The points are specific and clearly described. The instructions are concise and easy to understand! Growing succulents tips for beginners and children are presented in this video. Encourage your children to grow succulents… 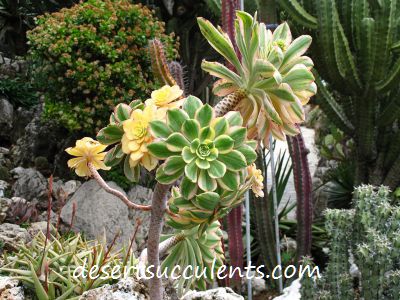 Before describing the many, many types of succulents it helps to state what a succulent is. The technical definition is “plants that have some parts that are more than normally thickened and fleshy”.  This is not a strict botanical identification because succulents may be in many different plant categories.  They are sometimes simply referred to…

To describe “the best indoor succulents” depends on a few things.  Where it will be located in your house, the size of succulent you desire, and the type of container to name a few.  However, I have listed some that are easy and interesting. Best Indoor Succulents List Aloe Vera Zebra Plant Panda Plant Bird’s…